All Port Macquarie 70.3 and Ironman entrants who were members in the year ended 30 June 2017 had the opportunity to win two spots to the Port Macquarie 2018 Ironman. They had to write a race report and why they thought they should win a spot. From those who submitted reports two were drawn out of a hat
The lucky winners were Nathan Gazzard and Graham Latta.  Here are their race reports. 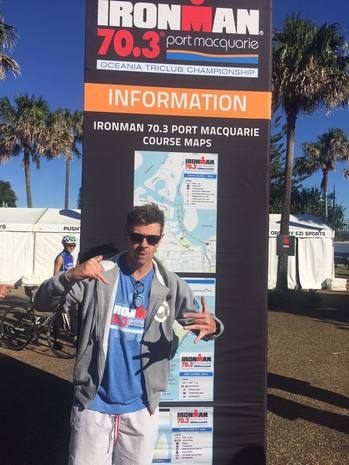 This is exciting, my first ever Half Ironman event after my first year as a Triathlete. I even had a coach leading up to this event and slogged it out to the best of my ability leading up to the race in the pool, on the road and on the run trying to meet my coaches expectations and more importantly my own high expectations. Seeing other club members in the pool, on the bike and passing by on some runs and then giving as much Kudos as I possibly could later on.
My goal is to beat Killer, my future wife…..I knew I could get her in the swim, she is British so that would be embarrassing coming out behind her, bike she is much stronger on the flat but I am better on the hills so this will be close and the run well she is much better but can I get a big lead and hang on?

I was in a good mood and bought my lovely Killa a really nice TT bike, knowing she will enjoy the race much more with a nice bike….I got plenty of brownie points for this nice gesture but this could have been a bad race strategy for me?

After months of training it’s the eve of race day. I was actually not as nervous has I have been before at race day and was containing my energy and thoughts, I felt good. The Swim was perfect and felt great picking of a few people and in a nice rhythm with my pace and breathing. I was out of the swim in a great time with a little cramp in the leg as I came out, otherwise I was fine. Onto the Bike and head down and straight into it, after just over 3 hours of cramps, hills and more hills I am off the bike and 11 minutes up on Killa.

That’s where it went wrong off the bike and the legs were gone, nutrition blown, double cramps and a pace that my grandma could have done better (RIP). End result $2.2K down on Killa’s bike and lost to my wife to be and the great Killa by  a mere 3 minutes.

The fact I am down $2.2K on a bike I bought for my wife to be, lost by 3 minutes to her and was named Rookie of the year, I feel I need the opportunity and Free Registration for Port as Rookie of the year to redeem my run, fix my bank balance and beat my wife Killa.

No, it is not the name of a formula one driver. It is what you need to get to the starting line of an ironman.

I have done a lot of ironman at Port and Forster. You would think by now you would not be nervous but the nerves are always there. For months leading up to the race you continue think about the race. Aspects about the upcoming race keep jumping in and out of your thoughts. As the day gets closer the nerves really start to build and as my family can attest to, you go into that “quite period” when all you can do is think about is the race.

The last 24 hours is terrible, especially trying to sleep the night before. You just want the race to start. Race day, I stood in the swim corral and there was a lady beside me and she was crying. The nerves had got to her that much. This is what ironman can do to you. I tried to console her by trying to convince her that once she hit the water she would settle down into the race.
Then came my turn to walk down the ramp and start the swim. For some reason, after the first couple of hundred metres I become very relaxed. I think it is just that release of all that built up emotion. To make it that much better the morning was lovely, the weather fine and the water warm.

It is a credit to anyone who races at ironman. It is not just a matter of turning up on the day and doing the race. There are the months of focused training needed to just get you to the starting line. It is a true testament of your inner strength.

The day is long enough, and for me as I get older the day is even longer. I certainly get value for money these days. You go through different feelings during the day. You just need to feed off the highs and endure the lows. Strange things flow through your mind. I keep thinking about what I will eat after the race as by this stage you cannot eat another energy bar or drink another sports drink. There is always that other thought of picturing what it will be like to stop moving and lie down and put your head on the pillow.

However, nothing can replace that feeling of running up that finishing chute to the cheers of the crowd. The beauty is that the fans cheer just as loud for you as the do for the winner.
If you have the opportunity to do an ironman, do it. You don’t do it for the medal, you don’t do it for the towel or finishers shirt. You do it to test your character. You will learn a lot about yourself in just one day.

Saying all that, come race day, I wouldn’t be anywhere else.